Guy the now royal-by-way-of-Kentucky beagle. What a hardluck-hit-the-jackpot story. I have a rescue dog of my own (Nickel Short), but this story isn’t about Nickel. It’s about this beautiful Kentucky hound called Zeus.

It was August 2013, I think. My friend Nobu Hata had posted a photo of a terrified dog in a Kentucky shelter that was days away from being euthanized. He needed a foster and then a loving home. I was in the midst of getting my condo ready for sale but thought I might be able to help. Foster a dog? Never done it before but submitted my application. Done.

If you’ve never fostered a pet before and can, you should. It’s quite an experience. The Naperville rescue group (I forget the name) partners with KRRA–Kentucky River Regional Animal Shelter in Hazard, Kentucky. Naperville volunteers drive down to Hazard and then haul rescued/abandoned dogs in massive vans back to Greater Chicago. It was a hot morning and I arrived at a church to pick up Zeus. This boy was exhausted and looked like broken goods. I couldn’t help but cry.

Two volunteers helped me put Zeus on a cart and a used crate and then I folded him and the crate into my little car.

I honestly don’t remember how I got Zeus into my 4th floor condo. He was difficult to move. I got him into my condo, and my Cavalier spaniel was not amused. Whatever. I got Zeus into the bathtub and gave him a warm bath. Actually four baths since his coat was crusty with all sorts of stuff. Pretty gross.

I took him for a walk in my neighborhood (#Pilsen) and passed two abuelas who gasped upon seeing Zeus. He looked rough, I won’t lie. I greeted the abuelas, and Zeus and I kept walking. Over the following days, Zeus blossomed. What a dog. I adored him but knew I needed to find a home for him because otherwise I would adopt him. And I knew I couldn’t afford another dog.

(I particularly love this photo of Zeus and Penny. Look at Penny. What a drama queen.) 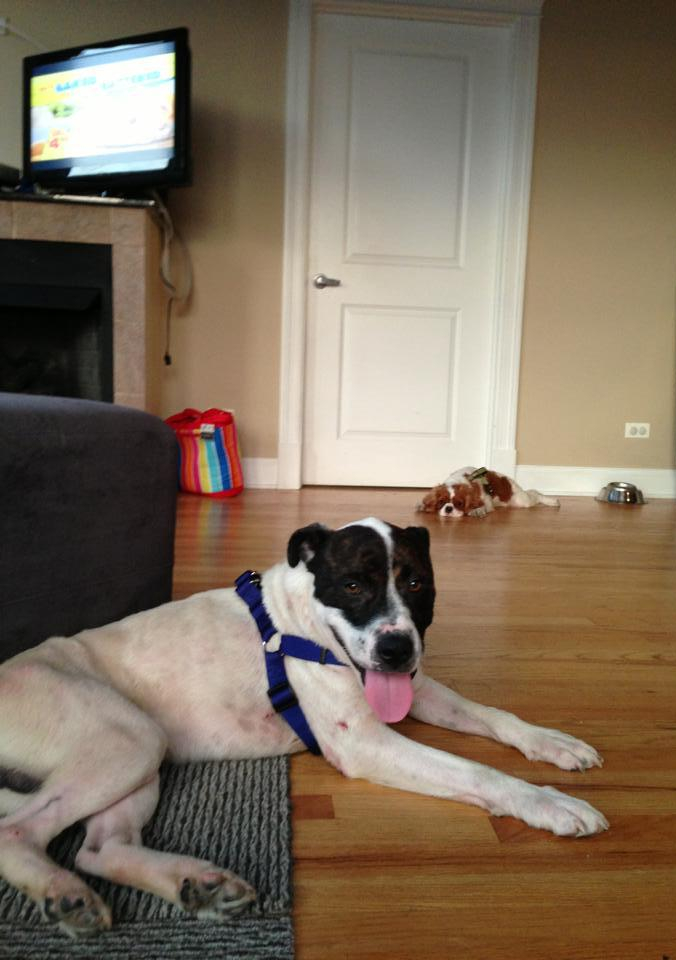 A few weekends later I headed to a backyard BBQ/get together on the North Side. I remember thinking, Bring Zeus. Maybe I’ll meet someone who wants to adopt him. And that, dear readers, is exactly what happened. I couldn’t believe my dumb luck. Or Zeus’s for that matter. Zeus sniffed and greeted a few of the party goers. Two of them, a married couple, mentioned that they were looking to adopt a dog. I extolled Zeus’s benefits, which were many (fully housebroken, great on a leash, doesn’t bark). I connected them with the Naperville rescue group, and they submitted their application. Their application was approved, and the day of the hand-off arrived. I drove Zeus to his new North Side home. Zeus’s new humans and I took him for a walk. At a moment that seemed good to me and when Zeus wasn’t looking, I slipped away and drove home. Again crying, but the good kind of tears.

You’ll be glad to know that Zeus’s new humans gave him a better life than I ever could have in Chicago. They have a beautiful home with a backyard where, I understand, he likes to run around and also lounge. In the winters, he likes to wear snuggly sweaters. His humans are devoted to him, and he to them. Heart, heart, heart them all, all darn day long.